Earlier this year, Google changed the way its image search works. While you only used to get thumbnail previews of the original image Google now displays the full size image in its search results, essentially making it unnecessary for the user to click through to the main page where the original image is hosted. While this may enhance the user experience, it is essentially a breach of copyright (see previous blog post) and resulted in a large decrease in referral traffic from Google to photographic sites (including Chocolate Fish Photos).  According to an industry wide survey, the average number of referrals from Google’s image search dropped by anything from 60-80% depending on the proportion of image content of the site. For Chocolate Fish Photos, which is more than 80% image based, the drop has been of the order of 70%.

Comparing the daily Google referral traffic to www.chocolate-fish.net for the months of April 2012/2013.

It is interesting to note how the drop is not uniform, however. The table below illustrates how the drop only occurred in those countries which have already implemented the new Google image search. In Germany and France, where pending copyright issues have prevented its introduction so far, the referral traffic is up by 150 and 50% respectively. Based on these figures, it is likely that the effect of the new Google image search is actually much higher than 70%. 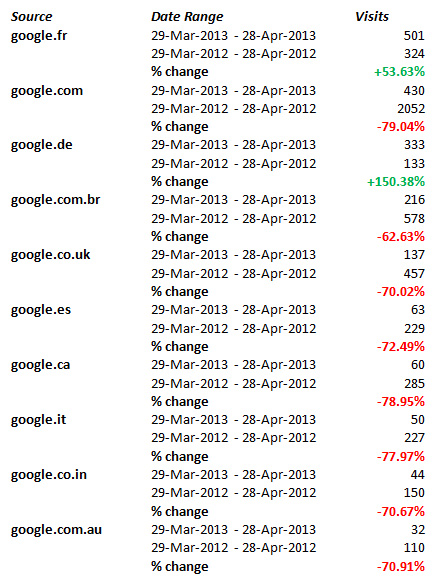 Google referral traffic to www.chocolate-fish.net from different countries. All countries where the new image search has been implemented show a strong decline in referrals. Only Germany and France where the old thumbnail-only image search is used, shows the opposite trend with a referral increase of 150 and 50% respectively.

While I cannot speak for other sites, the Google referral traffic used to constitute about 35% of the total unique visits to the Chocolate Fish Photos site. A reduction of up to 80% in referrals has thus a considerable impact on our total visitor throughput to the site.

While Chocolate Fish Photos is a small and independent photography site and does not display any on-site advertising, some photography sites also try to boost their income by displaying ads on their pages. As Google now keeps the users within the Google search pages all the time, the impact on advertising revenue for such sites must be considerable. One more blow to an already struggling photography industry.